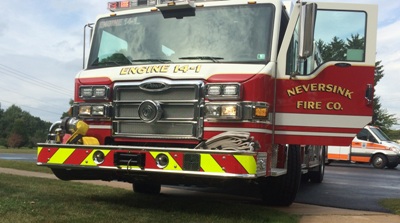 “On October 4, 1904 in the little town of Gloninger, the need to protect the village from fire was growing more and more apparent. On that day the Neversink Fire Company No.1 was born. On December 19, 1904 the company was incorporated. The company began with the first order of business: to purchase a fire truck. On November 21, 1905 a contract was signed by the fire company to buy, from the American LaFrance Fire Engine Company, a No.1 – 60 gallon straight chemical engine at a cost of $1,330.00. This would be drawn by hand and housed in a stable which belonged to Robert Beck.”

From these very humble beginnings, Neversink has seen much growth. Currently the fire company houses two fire engines, one water tanker truck, one utility vehicle, one UTV Gator and a special unit trailer, which is used for transporting various pieces of equipment to the scene of an emergency.

All residents should highly consider participating in this program. Firefighters, police and emergency crews often have difficulty in trying to locate a person’s home address. This could be due to a variety of reasons, such as mailbox markings that are too small to see, weather beaten numbers or even no numbers at all! These crews can greatly improve service to you when your address is clearly visible.

The cost of the program is $20 or $25 and includes everything needed to mount your sign. If you need assistance in mounting your sign, they can provide that too! Call Neversink at 717-273-5819 to purchase a Locater Sign and remember – all Neversink personnel are volunteers, so please leave a message and someone will get back to you.

Checks should be made payable to Neversink Fire Company.

Because Neversink operates entirely on a volunteer basis, they continually need your help! Please check their Facebook page frequently for announcements on any upcoming fundraisers.